A service just like Google Maps StreetView premiered in Norway this weekend. The name of the service is sesam.no Gatebilder. The images are for now only covering the capital of Norway, Oslo. 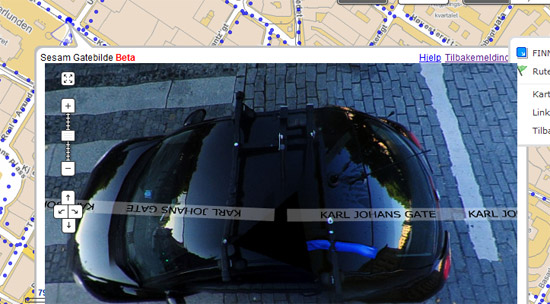 During summer 2008 sesam took 350.000 images using a black Volkswagen. Unlike Google Maps you can actually see the car on every panorama image if you move the camera. Very few people are visible since they deliberately choose Sunday mornings to take the panorama images. Faces are also censored.

The images are in higher quality than Google StreetView. It looks like it’s at least partly made by Mapjack. (Sesam also owns a similar search service with street view images in Sweden named hitta.se Gatubilder)