Today has been a busy day due to new images released from Mexico, Spain, Hawaii and the Netherlands. Traffic to streetviewfun.com has been extreme today and as a result of that our server has been down repeatedly. We are working on solving this. Ratings are turned off at the moment to reduce load on the server, but will be back as soon as things are more stable again. Apparently over 99% of our visitors come from Holland today. Anyone know if we have been mentioned in some news stories over there?

Update: Streetviewfun.com was mentioned in the Dutch newspaper Metro today (read comments made by our Dutch visitors below). You can see a screenshot of the article here: 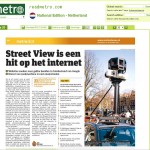 Streetviewfun.com has been mentioned in several newspapers around the world, for instance The New York Times, the big german news magazine Spiegel and the big french newspapers Le Monde and Liberation. We’ve also been on local TV in Baltimore.

4 thoughts on “Traffic jam at streetviewfun.com”