You can see Streetview type of image map solutions in other countries, but not by Google yet. Google Streetview currently only cover New York, San Francisco, Miami, Denver and Las Vegas. Instead the solutions outside the US is run by local companies and we’ve taken a look at some of those solutions. It’s very useful and great fun if you are going to visit for instance Paris, Toronto, Stockholm or Barcelona. Let’s take a look.

Several solutions we’ve found outside the US have made it possible to zoom in and out of images and move left and right down the street. Apparently it’s done with a normal digital camera in most cases and not by the far better one used by Google for it’s 360 degree panorama Streetview.

One of the best solutions is used at a famous cemetary in Paris.

The Cemetary of Père Lachaise in Paris has a very good 360 degrees virtual guide with real panorama images. It’s also available in english. Many famous people are buried in this cemetary, for instance Marcel Proust, Edith Piaf, Balzac and Jim Morrison. The graves are marked on the map.

In France there is also one covering central Paris and many other cities – Pages Jaunes (Yellow Pages). Spain have the same solution as France do on the very same page so you can visit for instance Barcelona too. It’s a nice solution similar to Google Streetview. Images are smaller though and it’s not in 360 degree panorama.

In Canada there is a beta version named VirtualCity available for an upcoming similar project with photos of streets in Montreal and Toronto. Image quality is rather low but it’s still useful if you plan on visiting any of those cities. 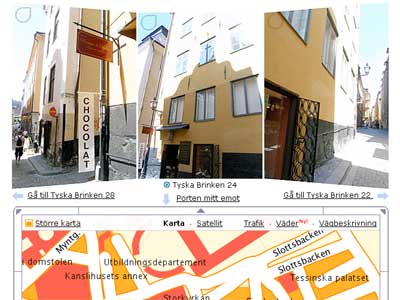 Sweden have yet another similar solution with pictures of streets in the capital Stockholm by hitta.se (example to the right). Image quality is high and larger images are also available. It’s mainly focused on the buildings and each address is connected to three images. Then you can move down the street or see what’s on the opposite side of the street.

To walk the streets in any of these foreign cities just enter an address or zoom in on something. If you need any help, just ask here and we’ll try to help out.

If you know of any other solutions around the world, please let us know by emailing info@streetviewfun.com or posting a comment here. Thanks!

3 thoughts on “Streetview in other countries”