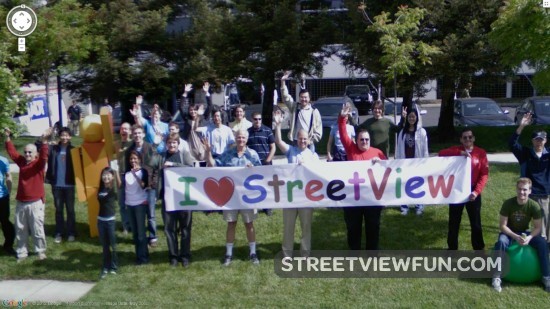 Google Maps Street View has just turned 10 years old. Congrats to Google! At StreetViewFun.com we’ve been celebrating the amazing content provided by Google every day since the very start back in 2007. Street View now cover 83 countries.

Larry kicked off the first prototype in 2004 with a team of Googlers who were passionate about his idea to create a 360-degree view of the world. They tossed cameras on a van, added some lasers (okay maybe it was a bit more complicated than that), and the first Street View car was born. In 2006, Street View officially hit the roads in a few cities across the U.S. and the first imagery was published in May 2007. Ten years later, we’ve published imagery on every continent, in 83 countries, and traveled about 10 million miles with the Street View car. Talk about a roadtrip. (Google)

Explore the best of what we’ve found over the years in the Top 100.

Explore the garage where Google started 20 years ago today

TikTok
What is he doing?  🤣 . #streetphotography #go