Google released some interesting news today about the WiFi problems and Street View:

Having spoken to the relevant regulators we have decided to start Street View driving in Ireland, Norway, South Africa and Sweden again starting next week. We expect to add more countries in time. Our cars will no longer collect any WiFi information at all, but will continue to collect photos and 3D imagery as they did before. (Google)

Ireland is the only new country mentioned here not yet covered by StreetView. Hopefully they will be able to publish images from Germany soon too.

Where would you want StreetView cars to go next?

Google Maps Street View is coming to South Africa within the next couple of weeks. The nation is hosting the 2010 FIFA World Cup (that’s soccer for you americans…). The games start on June 11.

Google have said that Street View will be available in South Africa when the games start. So, the first images from Africa might be just a few days away. Confirmed cities where they have taken images: Johannesburg, Pretoria, Durban, Port Elizabeth and Cape Town. What would you like to see in South Africa?

Experience the world in 3D on Google Maps StreetView. Click on the new 3D pegman on any StreetView image. You need special glasses to see it in 3D. Example:

Local copy in case you are viewing this after April 1st… 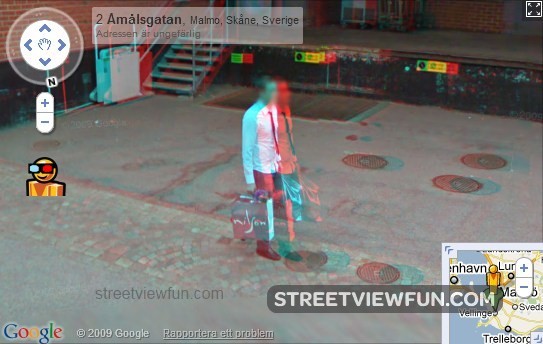 You can still access Street View in 3D by right clicking a street view and select 3d mode.

This is a stop motion music video made up of over 2500 frames from Google street view. Only used video editing software, screen capture software, photoshop, and Google. The song is an original by Race You There.

Google have today released a huge amount of new StreetView images from the UK. CNET reports:

Google will make a further 210,000 miles of UK roads available for your perusal on Street View this Thursday, adding to the 28,000 miles that are currently shown. That means you’ll be able to see about 96 per cent of this leafy land’s approximately 246,985 miles of thoroughfares.