The Google cars that take the StreetView images are able to shoot video aswell and we might be getting some new exciting features soon. You can already see an example of this amazing interactive video feature. 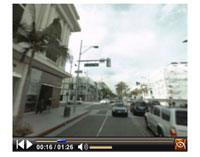 It’s a slow motion video experience and it takes a while to load but there’s clearly potential for this feature. The cam is a few feet above the car and you can move 360 degrees around while the video plays. When you pause the image quality gets better.

What will Google use this video feature for? Maybe instead of clicking images to move down a street we can just view a video of how it looks like driving down that street. In most cases an image will be better when looking for a specific address.

Apparently the images are streamed at 30 frames per second.

It’s a very interesting development and hopefully something great will come out of it. Usually that’s what happens when Google do something.

What I would like to see happen most of all though is better image quality and more cities obviously. In San Francisco the image quality is ok, but not in the other cities currently available. What do you think about all of this and the future of Google StreetView?

This is how the new amazing video feature looks like. Try it out. Coming to Google StreetView soon I hope.

The company behind all of this is called Immersive Media.